Designed for people leading an active lifestyle. Helps the body fight oxidative stress, which is a byproduct of any intense physical activity. Relieves fatigue and muscle pain, increases endurance and performance. Activates your body’s own endogenous antioxidant systems. 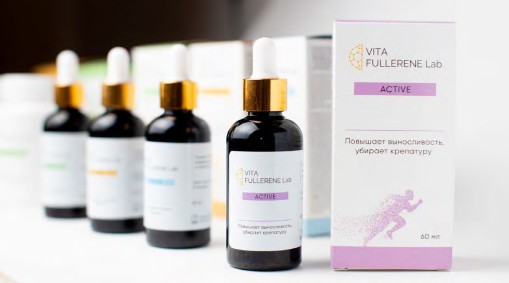 The proposed supplements are an attempt to increase significantly when starting from old diseases and infirmities, which increases the duration of an active and healthy life of a person, that is, what gerontology calls “neglected aging”.

Active longevity is, first of all, the absence of the main diseases of old age (Alzheimer's disease, Parkinson's disease, diabetes, CCC diseases, oncological diseases, arthritis, etc.). This is exactly what VITAFULLEREN additives are aimed at.

With the regular intake of VITAFULLEREN additives, it is possible to achieve negligible aging - a significant increase in the duration of an active and healthy human life.

Thousands of people in the world have chosen products with fullerenes to be healthy right now! *

Fullerenes are the third allotropic form of carbon after graphite and diamond. The discovery of the Fullerene C60 in 1985 marked the beginning of a new era in carbon science.

In 1996, the British scientists received the Nobel Prize for the discovery of fullerenes, which marked the creation of a new field of chemistry.

The spherical fullerene molecule C60 is an extremely stable form of carbon, consists of 60 atoms located in a polyhedron resembling a geodesic sphere (hence the name Fulleren: on behalf of the architect Buckminster Fuller, whose geodesic domes he resembles).

Fullerenes are so special structures that have a number of unique physical and chemical properties. The use of fullerenes as antioxidants that fight against the aging of the human body, as well as antiviral drugs is ensured by its unique molecular structure and biocompatibility.

Physico-chemical and biological properties, as well as a wide range of positive biological activity of fullerenes are determined not only by the C60 molecule itself, but are also associated with the unique properties of the special structures of the substance that C60 creates around itself and maintains for an arbitrarily long time.

In other words, the C60 fullerene molecule is a structure-organizing principle.

In general, Fullerene C60 is hundreds of times more antioxidant than any known antioxidant and is a catalyst for the recombination ("self-neutralization") of free radicals.

Any cookies that may not be particularly necessary for the website to function and is used specifically to collect user personal data via analytics, ads, other embedded contents are termed as non-necessary cookies. It is mandatory to procure user consent prior to running these cookies on your website.